In recent years the old town of Portugalete has degrading, a lot of shops close and in 2010 the indoor market of Portugalete closed and the neighborhood lost a lot of activity and life.

A few years later in 2014 became a social movement in the area against the new urban plan, the residents of the neighborhood came together, and carried out numerous initiatives including the occupation of a site from which they were displaced.

In 2015 these people after numerous meetings and bring different ideas, met with the council and raised the possibility of using the space of the indoor market for different social activities.

In April of that year, an agreement between the city council and neighbors was signed, this agreement set that the social platform can use this space during 1 year, with possibility of time extension.

Since that day every weekend several activities are develop in this indoor market: Ludoteca, films, lectures, games, workshops, etc.

Merkatua works in an assembly way, the assembly meetings are every Tuesday, and anyone can assist and propose activities for the Merkatua.
Now they want to participate in this CEAL Network project to attract other people of the village to contribute and participate in the life of Merkatua. 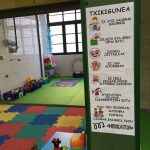 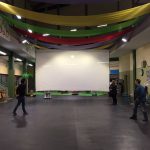